It took close to four years but the Town of LaSalle is moving ahead with stormwater improvements for Heritage Estates.

Mayor Marc Bondy says the work will assist with flooding issues in the neighbourhood.

“The town did a lot of work at our end to what the cause were,” says Bondy. “They did storm sewer connections, smoke and trying to find out where the issues were and obviously it was the water coming in, so we had alleviate that.”

He says all of the work will be done at Heritage Park off Heritage Dr. near Rushwood.

“Other than digging a big pond, which is a safety issue, they’re going to make this big soccer field which is lower than ground level. There’s tanks in there that will hold the water and then it will be released on a timely basis,” says Bondy.

The town budgeted around $3.6-million for the work but the tender came in at about $5.5-million.

Bondy says some provisions were made to get to the $4.7-million amount and he’s  not surprised the prices were higher than what the town budgeted.

“The way construction is right now, these people are busy and that’s how it works,” he says. “If you go in and they’re busy, they’re going to charge you more. They’re all busy and they were the lowest tender.” 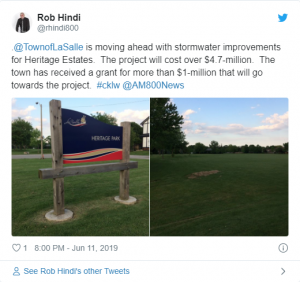 The town has received a $1.5-million grant from the National Disaster Mitigation Program to assist with the project, with work set to begin later this summer.

The work does not include service improvements for Oliver Farms.

The town applied for a grant for Oliver Farms but the request was denied.

Bondy says the town still has plans to move forward with improvements for Oliver Farms but at a later date.